Promise in a real life as we all know is an assurance given by someone to deliver something. If we visit a Pizza corner and order a pizza, they will not immediately handover us a pizza. Instead they will handover a piece of paper with a token number. That piece of paper is a promise given to us assuring pizza delivery.

Assume we are creating a function to order pizza. As mentioned earlier, it or the person who takes the order should return a promise.

While processing the pizza order, there can be two outcomes. One, the pizza is prepared successfully or in other words the task is resolved. Two, due to some reasons the order has to be cancelled or rejected. To visualize, we can imagine there is a red and green button in the pizza counter. If the order is ready, the counter staff will press green button(resolve), otherwise red button(reject). In our code, we can inject these buttons to handle resolve and reject case. Here is the updated orderPizza() function.

We just put an if...else to understand how resolve and reject are used. We will change it later.

In the previous section, we created a function to create a promise. Now, let us call the function to order a pizza.

pizzaPromise is the token number we have received. Let us go in depth on pizzaPromise. 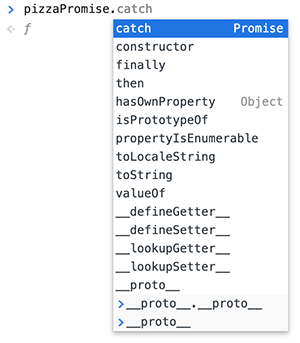 As we can see pizzaPromise is an object with several methods. The methods which we are interested are .then() and .catch(). These are event listeners of a promise, just like a button object have onclick(), onblur() and so on. We will cover more in the coming sections.

For now, we have received a promise object which has some event listeners.

Now the customer has received the token. There is no use in simply sitting with the token. We need to listen to get the update about our order.

As we saw earlier, .then() is a method of pizzaPromise. It is an event listener for both success and failure case of promise. Let us first define two functions to handle resolve and reject cases.

Let us now see if the success scenario works. We can modify our orderPizza() function to resolve the promise after 5 seconds, just to mimick that the pizza is ready after 5 seconds. Here is the complete code so far.

This code will print "I am very happy" in console after 5 seconds of page load. If we change resolve() in orderPizza() to reject(), then pizzaFinished() is called.

We just learned that .then() is an event listener. It accepts 2 arguments. First one is success handler for promise and second one is error handler.

The difference is only in the syntax. Internally .catch() calls .then() and pass the callback as .then()'s second argument.

Passing Data in resolve() or reject()

Say we are using promises to fetch data from an API. For demo purpose let us take a public API available on web. Anyone can search for users in Github using their public API. There is no signup process. Here is the API link to search for facebook in users.

Invoking Order for .then() and .catch()

We saw that if a Promise is resolved, .then() is triggered. .then() also returns a Promise object on which we can access the .then() again. So the pseudocode looks like:

This is called chaining of promises. It allows a sequential flow control.

allSettled() is a static method of Promise constructor function. It accepts an array of promises as arguments and returns a promise object. The returned promise object will resolve only when all the promises in the passed array are settled. Settled means either resolved or rejected.